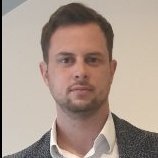 By Stephen.whittle
December 1, 2020 in Service Manager